In the previous post I looked at ACE (Attempto Controlled English), with the idea of adapting its grammar to Diinlang. I have found the ACE rules useful for standard English too.

A friend and myself had some fun experimenting with the sentence:

“John and Mary with the dog arrived later.”

In common English this is ambiguous. In ACE we have the rule that “John and Mary” is treated as a single noun phrase and subject. The implication is that John and Mary arrived together, or at least at the same time.

Suppose this was not the case, and we wanted to make this clearer. We might write:

“John, and Mary with the dog arrived later.”

This makes it clear that John is independent of Mary. What is not clear is if Mary has the dog with her, or is just known for being a dog owner. “Mary with the dog” may be an unusual nickname. We can write:

“John, and Mary with her dog arrived later.”

“John, and ‘Mary with the dog’ arrived later.”

Using ACE, we worked over a sentence that had been proving a problem for my friend, and were sucessfully able to rewrite and draft some alternatives. This reminded me that I too had a sentence that was proving problematic.

The original sentence was:

“A scout and his bike can easily and quickly be concealed by laying/lying both down under a section of net.”

The main problem her is the verbs “to lay” and “to lie”. One lies oneself, but lays an object. Here we have a subject (a scout) lying themselves and laying a bike. I could write: “A scout and his bike can easily and quickly be concealed by laying the bike and lying himself down under a section of net.” Which would be correct, but is unwieldy and unnatural sounding. 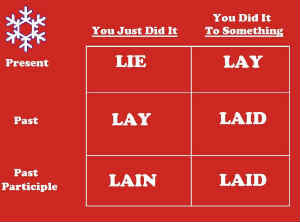 Firstly, I applied “Can-Prime” to the sentence. Then, applying ACE I placed the adverbs “easily and quickly” to a better position. This gave: “A scout and his bike may be concealed easily and quickly by both laying/lying under a section of net.”

Better, but the main problem of the laying/lying verb remained. ACE regards “the scout and his bike” as a single noun phrase/subject. I think as a person “the scout” has precedence over the bike. I tried playing with different tenses and decided that “had lain” sounded more natural than “had laid”. I also changed “and the bike” to “with a bike”. This made my final sentence:

“A scout with his bike may be concealed easily and quickly by both lying under a section of net.”

Is this “correct”? Doubtless, many will disagree, but the meaning is clear and unambiguous, which should be the objective of any grammatical system.
Posted by phil at 11:40