For the last few days I have been considering the topic of colours for Diinlang. The Diinlang word for colour/ hue is “hyu”. Compound “hyu” with a word and you can describe a colour relative to the word you have compounded. “Gold-hyu”, “carpet-hyu”, “cream-hyu” and so on. Obviously some of these are very relative to the conversation ensuing.For Diinlang 2.0 this may be simplified to “hu”.
Also needed are some names of colour hues to use with this and this raises the question of how many colour names are need. Different natural languages vary in the number of colours they lexically recognize. “Orange” was a relatively recent addition to the English language which is why some orange/ brown things such as red deer, red kites and robin red breast have the names they do.
Isaac Newton claimed the visible spectrum had seven main colours and numerous intermediates. Indigo is very difficult to pick out and it may have been Newton wanted seven colours because of the occult significance of the number. It has also been postulated that seven was desired to correlate with the seven notes on a musical scale. It is more practical to treat the visible spectrum as six colours. (Six is the first perfect number and a triangular number, so actually way cooler than seven!) 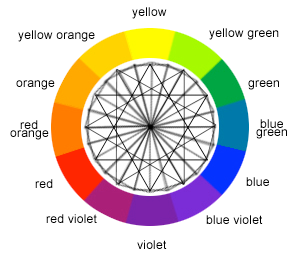 If we consider the colour wheel it conveniently appears as six sectors: Red, orange, yellow, green, blue, violet. Indigo is somewhere between blue and violet and this suggest we should consider hues that occur between the other sectors. If we mix red and blue we get purple. Blue and green gives us cyan, and important colour in printing. Magenta is purple and red. Yellow-green doesn’t really have its own name in English but is a very common colour in nature. Brown is also common. Technically it is dark orange but it is practical to treat is as a hue and it can range from very red-brown to very light yellow-browns. This line of thought suggested that it was practical for Diinlang to have twelve hues.
Looking at the names of hues in different languages showed no discernible correlations other than historical ones. Romance languages tended to use similar words to each other as did the Germanic and Scandinavian.
In the past I had considered a colour naming sequence based on the word sequence “Doh, Rey Me...” This rather falls down when you recognize six rather than seven main hues, let alone twelve! Many of these note names also resemble words already used in Diinlang. This also gives “sol” as green rather than a more logical yellow or orange.
One of the clearest and simplest colour naming systems was Tok Pisin. This reminded me that much of the world had some familiarity with English and this should be considered when selecting words for Diinlang. Many of the English words were usefully single syllable.
Here are the prototype colour hue names:
Red : Red may change if there is a homophone clash. Adopting “ler/ lert” for “to read” may have avoided this.
Brun : Brun is for brown and dark shades of red-orange and yellow-orange. Brun is considered to encompass both brun and beyj.
Oren : Oren is for the hue orange. This word already has this use in Welsh and Malay.
Beyj : Beyj is for the numerous and commonplace yellow-brown colours such as tan.
Yahn : Yahn is yellow. The Diinlang word is more compact than the English and has some similarity to the French jaune and similar words.
Laym : Laym is the word for yellow-green colours such as olive, pear, lime, chartreuse etc.
Griin (Kwin) : Griin is green and can be taken to encompass the range laym to sian. “Grin” may be selected instead. The word “verd” is likely to find its way into Diinlang but may have a more specific meaning such as “living greenary” or “foliage”. The new spelling system reverts this to “green”. For Diinlang 2.0 this becomes “kwin”, since it is shorter, and more distinct from “gri”.
Sian : Sian the name for blue-green hues, including cyan, an important colour in printing. A number of languages write cyan as cian.
Blu : Blu is blue. The term may encompass sian to viol, depending on individual colour perception.
Viol : Viol is blue-purple and the last visible colour before ultraviolet.
Purp : Purp is purple, the colour formed by mixing blue and red. I’m not entirely satisfied with this name.
Majn : Majn is magenta, the printer colour lying between purple and red.
Pink : Pink is a light shade of red but many languages have a distinct name for this tint. In English pink can cover a range from bluish-red to magenta. It is also the best colour name we have to describe Caucasian flesh. Pink gives us a thirteenth hue name.
Strictly speaking the above words would be combined with “hyu” but this will doubtless be dropped when the context is clear.
The above hues are complimented by the shades “blak”, “gri” and “wiyt/ viyt”, corresponding to the English black, grey/ gray and white. “Grey” and “gray” would both be acceptable Diinlang spellings but to avoid ambivalence Diinlang uses a spelling and pronunciation based on the French “gris”. Given the trouble “w” poses to some nationalities “viyt” may be the preferred spelling and pronunciation. The three shades and thirteen hues gives us sixteen colour names. A case might be made that orange-yellow, often called “gold(en)” in English might qualify as another named colour, “ayen”, giving fourteen hues.